A PHP Error was encountered

Message: Trying to get property 'views' of non-object

As more and more farmers convert acreage to hemp cultivation, the tension continues to rise between them and any neighbors who happen to be growing cannabis either outdoors or in a greenhouse as the risk of cross-pollination threatens to spoil entire crops of cannabis that rely on female plants for flowering and a proper harvest.

This debate is boiling over in communities up and down the west coast, where states like Washington, Oregon, and California have all legalized the regulated cultivation of cannabis. Since the passage of the 2018 Farm Bill which federally legalized any cannabis plant with less than 0.3% THC, there is a new weed in town and it has sparked heated disputes, and even some big money lawsuits, but so far no real solutions.

The U.S. Department of Agriculture is aware of the issue and this week has delivered a $500,000 grant to a research team from Virginia Tech University which plans to use drones and advanced mathematical models to study the drift of pollen using genetically engineered (GE) hemp plants.

These particular plants have been grown to express a fluorescent pollen that the research team will easily be able to track with their high tech drones. Each drone is topped with a vacuum-like apparatus that sucks in surrounding air and particles in the air and deposits them into a liquid bath. Any pollen particles that get trapped in that liquid will be analyzed to determine if they came from the GE/fluorescent crop. Researchers can then figure out how far the pollen traveled, and from what direction. The drone will also relay real-time total air particle counts to determine at what ratio the pollen exists. 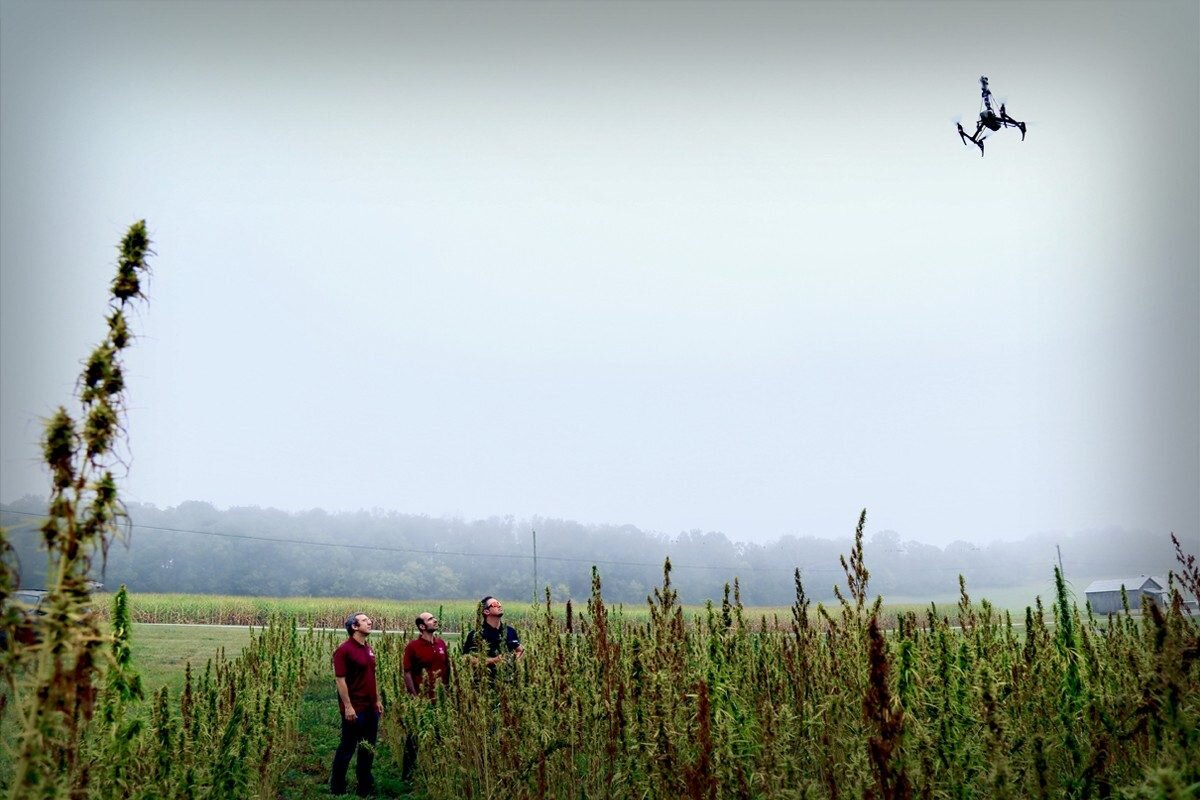 “Using sensors onboard drones, we can collect pollen and forecast its movement at different altitudes and distances from source fields,” says Shane Ross, an Aerospace Engineering professor at VT. “Our models take input like the size of the pollen grains, the wind conditions for that day, humidity, temperature, and things like that. Then they can forecast the trajectories of the pollen grains and where they’ll get deposited.”

That is f’n fascinating.

“Initially we were going to just focus on switchgrass. However, given the increased interest in CBD, our collaborator, Neal Stewart, suggested we also work with GE hemp. So, we are going to work with a system that we know is going to work (switchgrass) and then move into a system that’s never been done before (hemp). It is quite exciting,” said research team member David Schmale, a professor in the Virginia Tech School of Plant and Environmental Sciences in the College of Agriculture and Life Sciences.

Cannabis is a dioecious plant, meaning that male and female features are expressed on separate plants, rather than on the same plant. Female plants create the buds we all love to smoke, squish, or extract to release the plethora of cannabinoids, terpenes, and flavonoids within. Male cannabis plants, like male hemp plants, will generate seeds and pollen, which devalues cannabis but can be a goal of hemp farming where the seeds and biomass hold a monetary value. Even hemp farms that aim to maximize CBD production by growing flowering female plants are prone to rogue males cropping up and once their pollen is in the wind, there is no telling where it may end up. The team from Virginia Tech hopes to answer that question.

Not only will their research shed new light on the dispersal patterns of hemp pollen, but the same feedback will provide useful insight on how fungicides and pesticides travel as well. This has been another raging front in the War on Weed, with legal cannabis crops being grown on California’s central coast under constant threat of contamination from pesticides being crop-dusted onto nearby farms.

Drifting fungicides can (and likely will) register on the rigorous third-party lab testing that is conducted on all legal cannabis. Even minute amounts detected can render an entire batch or crop of cannabis contaminated and illegal to sell on the regulated market. Drifting herbicides, on the other hand, can quite literally decimate a cannabis crop.

This research to determine the drift of pollens and contaminants will almost surely be used to craft new agricultural laws and regulations that will not only affect cannabis and hemp farmers but all farmers.

In the meantime, the 2018 Farm bill may have ended the federal prohibition of the hemp plant but states across the country are flexing their rights to regulate the plant as they see fit. We need to look no further than right here in California where only 23 of the 58 counties in the state allow for commercial hemp cultivation. Much like with our regulated cannabis fiasco, way too much decision making power rests at the local level. California is the only hemp-producing state that puts the power of whether or not to issue an ordinance for hemp production into the hands of county-level agriculture commissioners.

They say that good fences make good neighbors, but pollen cannot be contained by a partition so hopefully, good research will do the trick.